About an hour’s drive north of Verona, just below Austria, Trentino Alto-Adige is surrounded by the soaring peaks of the Dolomites, a UNESCO heritage site.

Rising to heights of over 3000 meters, the dramatic landscape is stunning with deep valleys, vertical walls of rock, and sheer cliffs. Before the invention of airplanes, the valley was the major passage towards northern Europe. With its location as a gateway to Italy, the region has been the prime focus of conquest throughout history – from the ancient Romans to the Nazi regime. A part of the Austria-Hungarian Empire known as the ‘Südtirol’, this province became part of Italy in 1919 after World War I.  Both Italian and German are spoken in this autonomous region, which helps to preserve its Austrian/German cultural and language background. The town and village signs, menus, wine labels and the DOCs often have names in both languages.

The Alto Adige has a long history of the vine. Archeological finds of winemaking tools date from 500 BC have been found and the Romans, beginning in 15 BC, improved on the viticultural practices of the Rhaetians, the local tribe of Alpine inhabitants.  Today Trentino Alto-Adige ranks 9th in production among the 20 regions, about 70% of which is white wine. The grape varieties include Pinot Grigio, Pinot Bianco, Chardonnay and Sauvignon Blanc, as well as the German varietals such as Riesling, Moscato, Müller-Thurgau, Sylvaner and Gewürztraminer. The native red grapes are Sciava, Legrein and Teroldago, although plantings of the international grapes are common –  Cabernet Franc and Savignon, Merlot and especially Pinot Nero.

A fortunate wine growing area, it is perhaps the perfect balance of brisk Alpine air and the Mediterranean sun to create a continental climate. Elevations of the vineyards range from 600 to 3000 feet above sea level, creating many distinct microclimates due to the warm influences of Lago di Garda and the various expositions of the steep sloped terraces. In addition, there are significant diurnal swings (day to night temperatures) which provide acidity, aromas and freshness to the wines.

The Alps and the Dolomites to the north provide protection against the cold winds coming from the north. It shares the 46th parallel north with the famous French region of Burgundy, and they share the high quality of their wines in common.

The soils here reflect the area’s ancient past of climatic and  geological shifts from extinct volcanoes to the glaciers of the Ice Age. A virtual mosaic of the vine’s favorite growing terroir can be found – volcanic porphyry from lava flows and pyroclastic debris, morainic soils left by the retreating ice, limestone and sandy marls from the prehistoric shallow sea and coral reefs, and weathered rock of quartz and mica. 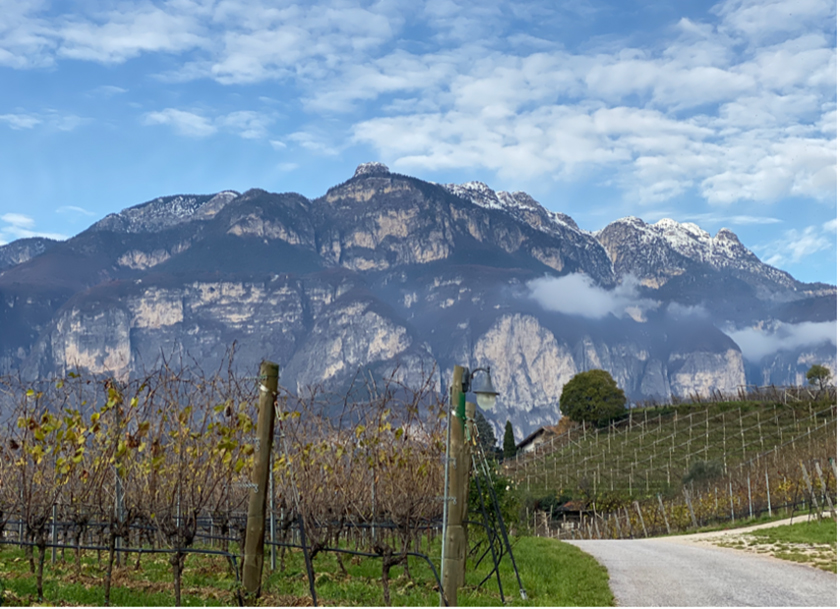 Trentino, in the south of the region, closest to Lago di Garda, is best known for its sparkling wines, made in the traditional method with the second fermentation in the bottle. The grapes must be from the province of Trento, across 70 localities and 57 winemakers. Like Champagne, this sparkling wine is  made only with Chardonnay, Pinot Blanc, Pinot Noir and Pinot Meunier. Called Bollicine di Montagne, this is the only sparkling wine region located in the mountains, creating wines of elegance and complexity. 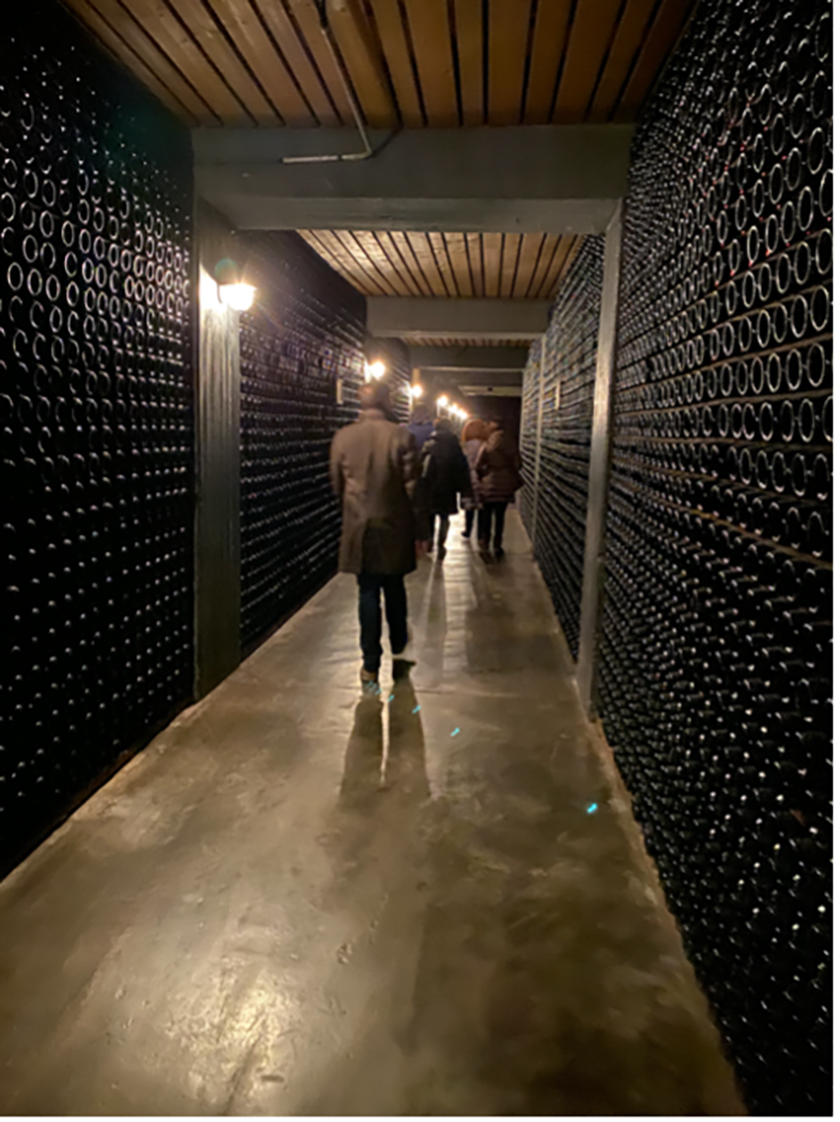 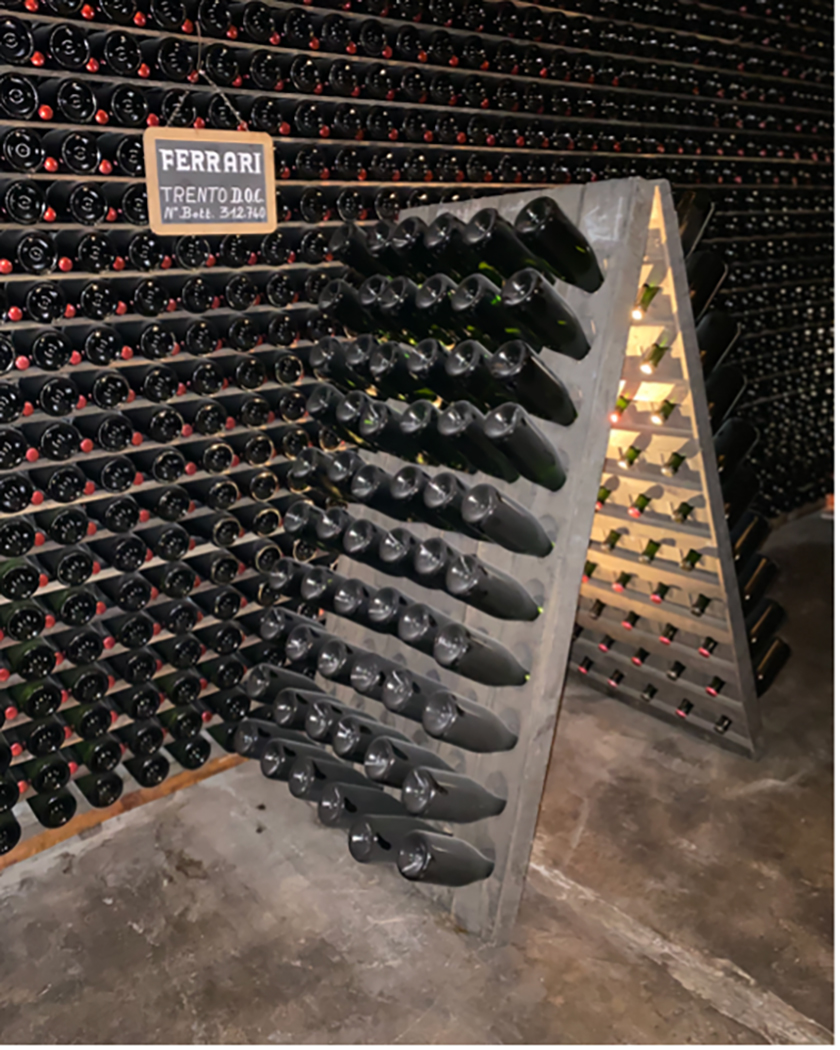 According to the DOC regulations, Trentodoc can be produced as white or rosé in the following versions:

One of the biggest and the most historic producer, the Ferrari winery has up to 24 million bottles in its cellars, aging from 2 to 15 years. Right in the center of Trento, there is a lovely provincial enoteca, Palazzo Roccabruna, , which makes trying a wide range of the bubbly in one place quite easy! They have a variety of wine and beer tasting events, as well as being a great source of information when visiting the region.  https://www.palazzoroccabruna.it

Like Champagne or Prosecco, Trentodoc sparkling wines are ideal as an aperitivo. There is enough structure to pair it with all types of food, from seafood to Asian foods, excellent with pork and veal, from pasta to cheeses and salamis. Typical aromas of yeast, brioche, pear, hazelnuts and golden apple. 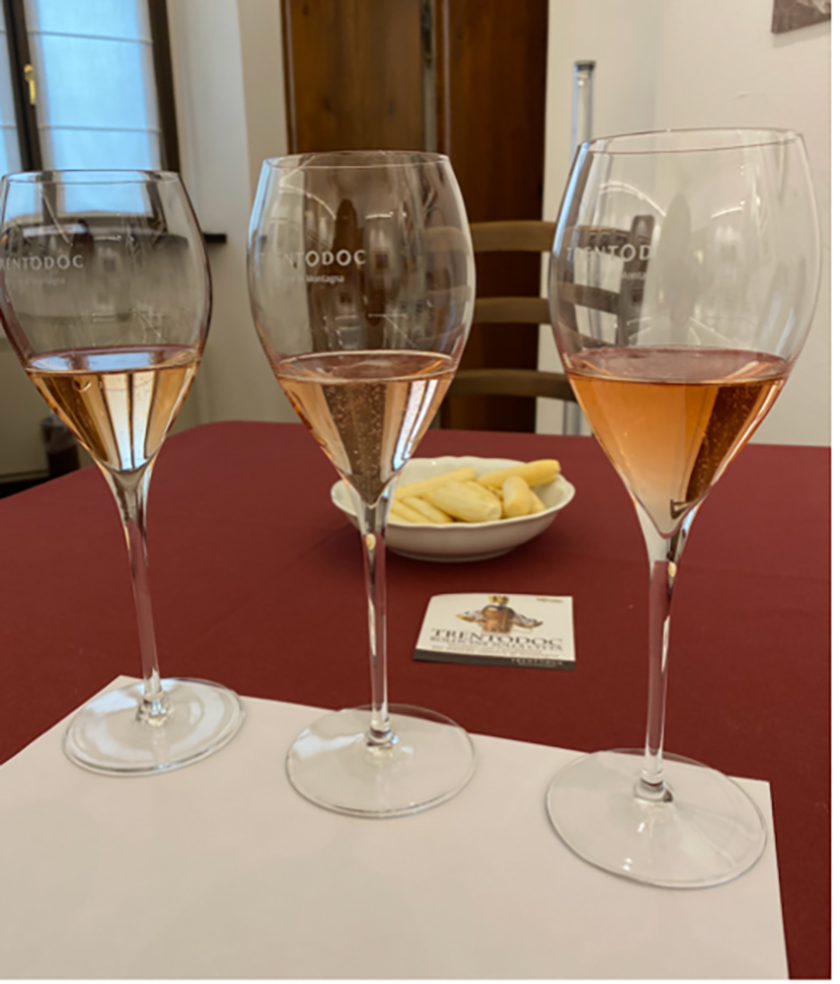 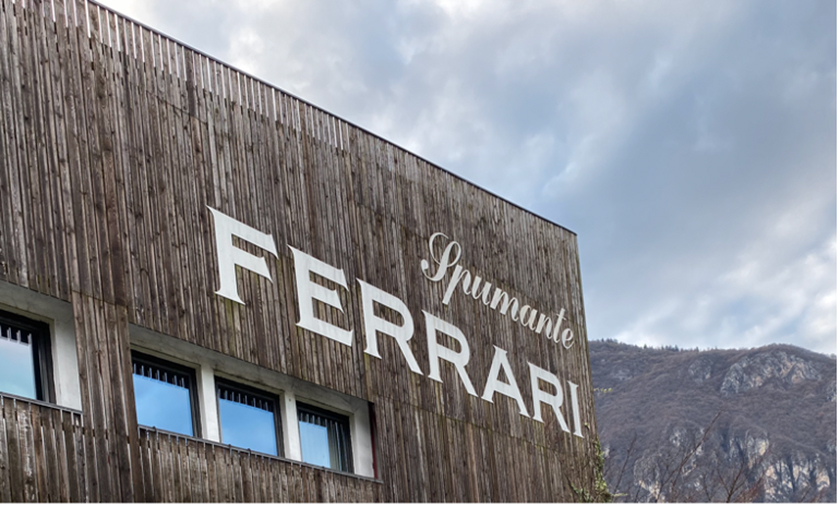 In the north of Trentino, the Campo Rotaliano is a triangular plain, one of the only stretches of flat land in the Adige valley. Vertical rock walls surround and protect the plain providing a significant influence on the climate. Together with the winds created by the convergence the Val di Non and Valle dell’Adige, these factors moderate the temperature and humidity to create a perfect wine growing environment.

Von Goethe, the German writer, called it “one of Europe’s most beautiful gardens under vine”.

Teroldego, the red grape native to this area, has been genetically linked to Syrah, Pinot Noir, Lagrein and Marzemino. The outstanding producer is Elisabetta Foradori and her wines are worth seeking out.

Teroldego has a rich deep color, minerality and bright acidity, without being overly tannic. Aromas of pomegranate and blackberry, spicy notes of black pepper and anise, and sotto bosco (forest floor). Fans of Chianti, Barbera, Dolcetto and Cabernet France should give this wine a try. Pair it with mountain foods such as salami and mature cheeses, spaghetti carbonara with speck, wild game dishes, Canederli (dumplings in broth) or polenta with mushrooms.

Many wineries tend to be cooperatives because of the very small landholdings of the grape growers. The average holding is only about 2 -3 acres. 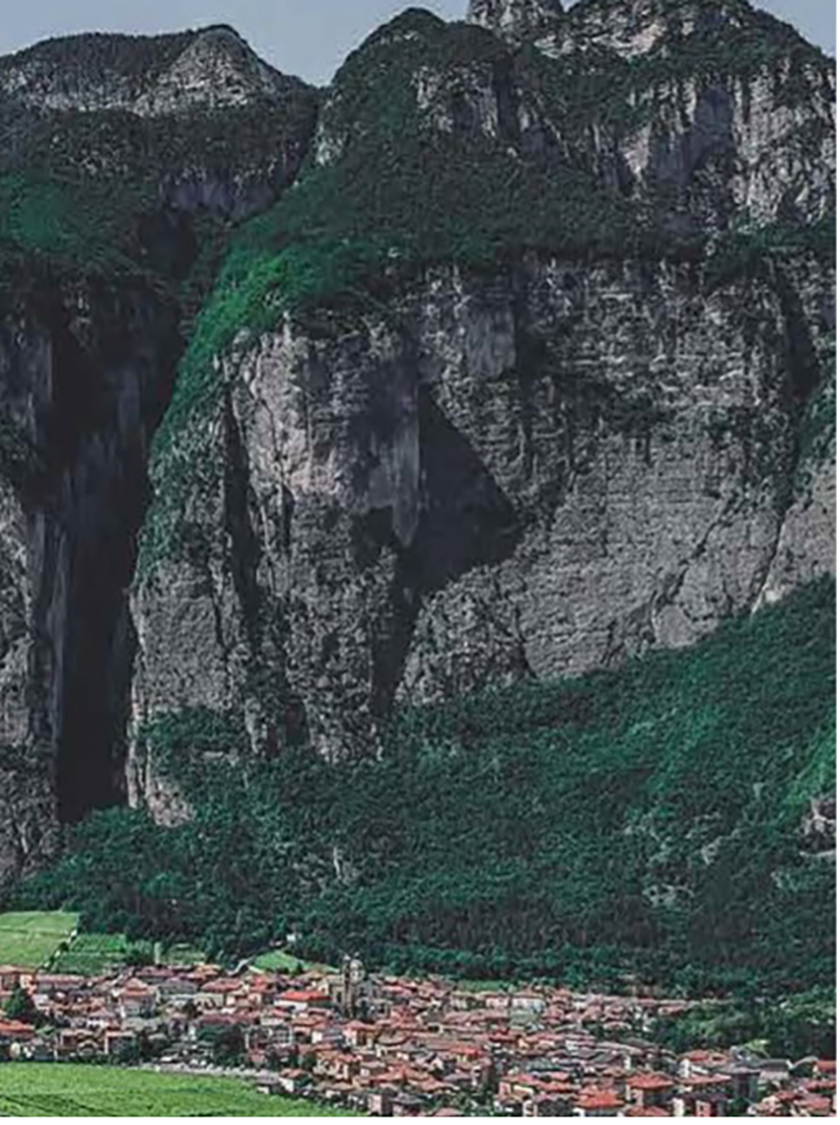 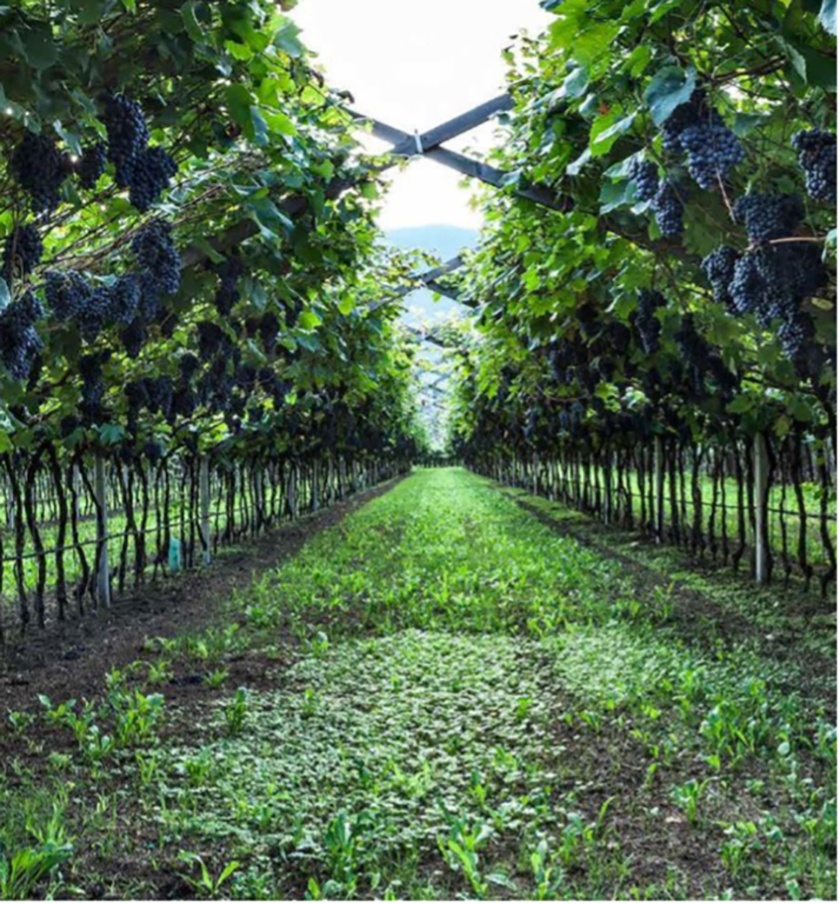 From Trento to Bolzano is an easy hour’s drive. In the more northerly part of the region where the Alps become the Dolomites, the steep vineyards of the Alto Adige climb the sides of the glacial valleys in terraces. Divided by the Adige and Isarco Rivers, the area has very warm summers with cool nights, producing pronounced aromas and elegant wines.  With the German influences of the Sudtirol, the wineries are often called “Schloss”, the word for castello or “Kellerei”, meaning cantina. 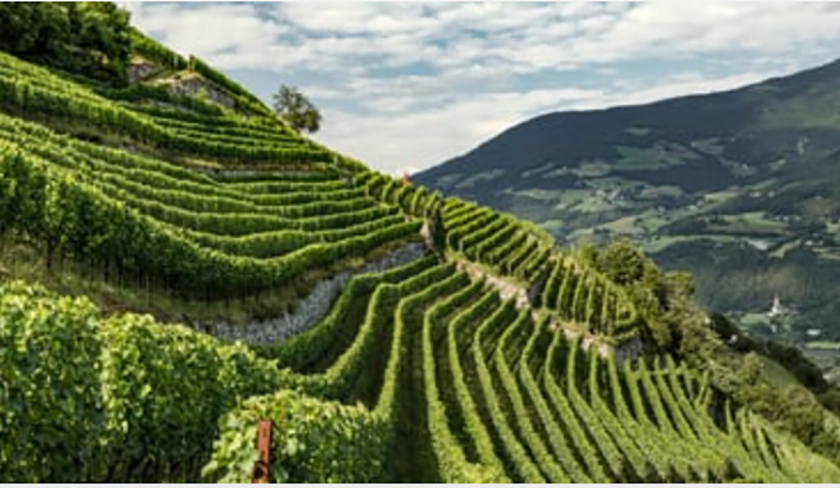 White wines shine here, accounting for over 60% of the region’s production. The quality of the wines is beginning to rival those of Fruili Venezia Guilia. The Isarco Valley (Eisacktaler) features mostly single varietal wines made from typical German grapes like Kerner, Silvaner, Gruner-Veltliner, Muller-Thurgau and Gerwurztraminer. The village of Tramin (Termeno) is thought to be the home of Gerwurztraminer.

In the far west of the region, the Val Venosta is noted for Pinot Bianco and Riesling, while further south Chardonnay, Sauvignon Blanc and Pinot Bianco grow in Appiano and Lago di Caldero. In the mild climate around Merano, to the west of Bolzano, we find Pinot Bianco and Sauvignon Blanc. America’s darling, Pinot Grigio, thrives here in the high altitude vineyards, with strict limits on yields. The cool nights produce wines with floral aromas. On the palate, there’s flavors of apple, peach and pear with good minerality and high acidity from the calcareous soils.

The local red native grape varieties of Lagrein and Schiava find their home here in the Alto Adige. The warm valley of Bolzano/Bozen, whose summer temperatures rival those of Sicily, fully ripen the grapes even in a northern mountain location. Schiava is the everyday drinking wine found on every table at home and tends to be found located at the base of the slopes. Santa Maddelena and Colli di Bolzano are the best growing areas. Bright and floral, with red fruit and moderate tannins and mountain acidity, it could be an Italian choice for a Beaujolais drinker.

Vintners are increasingly finding Lagrein to be a wine with a lot of potential. The grape thrives on the alluvial soils of the valley. With barrel aging and careful tending in the cellars to tame the tannins, it is now being found on lots of wine lists and is one for the cellar. Some notable producers are Kellerei Bozen, Kellerei Adrian, Hofstatter, Cantina Terlano, Muri-Gries and Tiefenbrunner. There’s a dark red version, Lagrein Scuro or Dunkel and a pink one called Lagrein Rosato or Kretzer. The red version is a deep garnet color, it is full-bodied tannic wine, with fresh acidic structure and a slight astringent finish; aromas of black fruits, violet and spicy notes like pepper and licorice. Pair it with food of the Alto Adige – speck (smoked cured ham), salami, beef or game stews, pork dishes of all kinds, and strong mature cheeses.